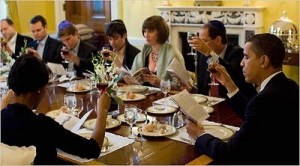 In his famous speech on race relations, “A more Perfect Union,” Obama made reference to supremacist black nationalist belief that blacks are the real Jews, the Chosen People. White supremacists, such as the Christian Identity movement have a similar race-based gnostic concept that whites are the biblical “Chosen People” and inherited the Jews’ covenant with God. This quote is excerpted from the text of the speech that you can read here.

In my first book, Dreams From My Father, I described the experience of my first service at Trinity:

“People began to shout, to rise from their seats and clap and cry out, a forceful wind carrying the reverend’s voice up into the rafters….And in that single note – hope! – I heard something else; at the foot of that cross, inside the thousands of churches across the city, I imagined the stories of ordinary black people merging with the stories of David and Goliath, Moses and Pharaoh, the Christians in the lion’s den, Ezekiel’s field of dry bones. Those stories – of survival, and freedom, and hope – became our story, my story; the blood that had spilled was our blood, the tears our tears; until this black church, on this bright day, seemed once more a vessel carrying the story of a people into future generations and into a larger world. Our trials and triumphs became at once unique and universal, black and more than black; in chronicling our journey, the stories and songs gave us a means to reclaim memories that we didn’t need to feel shame about…memories that all people might study and cherish – and with which we could start to rebuild.”

A couple of hundred years ago, some black slaves in America began to identify intensely with the suffering of the Jews of the Old Testament and the captivity of the Jews in Babylon and in Egypt. The idea has been transformed into the basic belief of the the black nationalist cult religious movement. There are a number of black nationalist sects and various groups identify themselves as Muslims, Jews or Christians, but they are really not any of these and have more in common with each other than they do with the religions to which they claim to belong. Black nationalists maintain that they are “the real Jews” and that “white” Jews are apostate. They revile traditional Christianity as a religion designed to keep blacks (and other non-whites) enslaved and oppressed. It is not a church, but an anti-church.

Therefore, God’s Word of recon­ciliation means that we can only be justified by becoming black. Reconciliation makes us all black. Through this radical change, we become identified totally with the suffering of the black masses. It is this fact that makes all white churches anti-Christian in their essence. To be Christian is to be one of those whom God has chosen. God has chosen black people!

Obama prays to the God of Black Supremacy

Furthermore, Black Liberation Theology teaches that white society is the Antichrist and America’s democratic institutions, such as the Constitution, are the demonic tool of the “Antichrist,” used by the Antichrist to hold the non-white peoples of the world in oppression and servitude. This quote is taken from “Black Theology and Black Power” by James H. Cone (1969), page 135.

Because Black Theology is biblical theology seeking to create new value-perspectives for the oppressed, it is revolutionary theology. It is a theology which confronts white society as the racist Antichrist, communicating to the oppressor that nothing will be spared in the fight for freedom. It is this attitude which distinguishes it from white American theology and identifies it with the religionists of the Third World.

Black Liberation Theology, like the broader theology of black nationalism, is a bizarre, supremacist, cult religious belief system and Americans need to learn more about it, in order to understand Obama’s motivations. Obama often reveals his black nationalist beliefs in his actions as well as his words. Traditional Christianity was not taught at Trinity United Church of Christ and that is the only church that Obama ever joined.

This is a clip of a group of Black Hebrew Israelites, who have similar beliefs to the Black Liberation Theology of Obama’s pseudo-Christian sect, but are much more public about it. These doctrines teach that evil white people can be redeemed only by submitting to black will, such as the white in this clip, or by being eliminated completely. This belief justifies Obama’s own urge to dictate in order the destroy the system of black oppression.

Some have suggested that Obama is a psychopathic Narcissist, a psychological disorder endemic to politicians and cult leaders. Such people are attracted to cult doctrines like the religious doctrine of black racial nationalism, because it justifies their megalomaniacal feelings of having a divine mission in the world.

Obama: I’m Jewish in my soul.