W.E.B. DuBois was a co-founder of the National Association for the Advancement of Colored People (NAACP). DuBois was a Black Nationalist/Pan-Africanist and the most famous civil rights leader of the first half of the 20th century. The source of this article that appeared in an American German-language newspaper in 1937 is the following link.

The relationship between Black and White Nationalists is more complicated than most realize. As counter-intuitive as it may be, there is sometimes mutual understanding between black and white nationalists. Black Nationalism is generally a supremacist doctrine and the movement has a long history of working with Nazis, the KKK and white supremacists. Marcus Garvey, the founder of the modern Black Nationalist mass movement, met with the KKK and mandated that blacks should model their organizations after white supremacist groups and said that one day the black race would produce their own “black Hitler.”

Fard Muhammad, the founder of the Farrakhan’s Black Nationalist, Nation of Islam (NOI), was essentially a white man, though he may have been part black, who some believed was a Nazi agent from Turkey. He disappeared only a couple of years after founding the NOI, which has a doctrine, much like a black version of Nazism. White and Black Nationalists have worked together under the principle that the enemy of my enemy is my friend and both movements have an interest in bringing down the American system.

The Black Liberation Theology of Obama’s own church in Chicago was inspired by the NOI’s Black Nationalist doctrine. For more info go to this link:

Obama and the Black Nazi Movement

DuBois eventually joined the Communist Party after the defeat of the Nazis and moved to Liberia, where he died. It shows that black nationalists will potentially work with any anti-American group to advance their anti-American agenda.

This is an English translation of the article about W.E.B. DuBois and his tour of Nazi Germany. 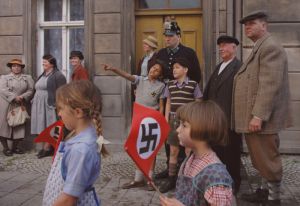 Professor W.E.B. DuBois of Atlanta on the Jews in the Reich

“The situation is regrettable, but not comparable to that of the Negros” – Germany nervous, but hopeful.

A few days ago, Dr. W.E.B. DuBois, an educator of the black race, who toured Germany and other lands with a stipendium from the Oberländer Trust of the Carl Schulz Foundation returned after a stay of 5 months in Germany and gave a reporter of the “New York Staatszeitung and Herald” a sketch of his impressions, in which he as member of a frequently oppressed and persecuted race drew interesting comparisons between the position of the Negros in the USA and the position of the Jews in Germany.

The Observations of the professor, who gives lectures at the university in Atlanta on social science and at this time is currently visiting his children and grandchildren in New York, are all the more interesting, as he studied in Heidelberg and Berlin 30 years ago and audited the lectures of Professor Treitschke, Schmoller and Adolf Wagner for three semesters . He can therefore compare the condition of today and the population of today with those of that time 30 years ago.

Dr. Dubois was particularly impressed by the by the different attitude towards the Jews and the agitation and nervousness of the population, which he attributes to the fear of the neighboring lands and partly due to fear of war. On the other hand the professor observed an unconditional trust in National Socialism and in Hitler and the thankfulness of the order that he has created and for all of the good that he has done during the four years of his time in office.

Among these good works professor DuBois mentions first the apartment buildings, which have no comparison in Europe, as he remarked, and secondly the street (autobahn) construction in the Reich. He saw however, also the general and complete social control (Gleichschaltung), which to him in so far as it extended to the people themselves seemed difficult to accept. This social control, however, cannot preclude that the listeners sometimes thanks a speaker with cold silence rather than the expected inspiration, as professor DuBois wanted to remark and as he also experienced in the American South, when negros wished to politely contradict a white speaker.

(Blogger’s Note: “Gleichschaltung” is the term used by the Nazis to mean that the opinions of the public were forced into total alignment with those of the Nazi Party, by social pressure as well as threats of violence.)

The Party Congress in Nuremberg? The observer thought it was “terrible”, what was said there on the speaker tribune, would have earlier caused a war in earlier times.

Reich Minister Hess, the representative of the Führer made the greatest impression on Dr. DuBois, however, he believes that the influence of Hess may be understood as declining. “And the population themselves?” asked the reporter. Do you believe that they are happy? Thoughtfully, Professor DuBois stoked his grey-flecked Van Dyke beard. Happy, no: but hopeful. Indisputably there is poverty in the land. I saw signs that made one aware of the 300,000 in the Reich that were suffering from poverty and which asked for donations for the destitute. I, myself, felt the shortage of edible fats and that the meat was of lower quality than in America. Postage is for the German income high, but lower than in America or Paris, for example.

Nevertheless, Professor DuBois perceived nowhere any undercurrents (of dissatisfaction), though also little open joy. In Vienna and Austria the people are actually more open and happier, the professor said in comparison; but in Berlin there is no “Gemutlichkeit”, a word that the Professor knew well and pronounced very well, as his pronunciation of German is generally excellent.

The treatment of the negro shows, as Dr. DuBois expressed, “not a trace at all of racial hatred” and the attitude of the German Press, during the Olympic Games, was completely fair, even friendly to the towards the colored athletes. But Dr. DuBois can “simply not understand” the attitude towards the Jews. The situation with the Jews is, as he said, very regrettable, but it cannot be compared with the situation of the Negros in the United States.

Racial Hatred here and over there

What is happening in Germany, said the Professor, is happening in a lawful manner and openly, even if it is cruel and unjust. But in the United States the Negro is secretly persecuted and marginalized in flagrant violation of the law. Both races, however, show the same reaction under this treatment; they try to remain as inconspicuous as possible, to not make themselves noticeable. Both races are portrayed as lustful; here Dr. DuBois compares the tone and content of the anti-Semitic newspaper by Julius Streicher with the same kind of anti-Negro propaganda in the South. But otherwise it is impossible, to draw a comparison, concluded Dr. DuBois, because the persecution of the Jews in Germany arises from completely different reasons and according to the law, as the Professor explained. He was himself received in a very friendly manner and did not suffer from any racial prejudice at all.

* Note: Neger, Neger, Schornstein Feger is a film made for German TV, about Hans Jurgen Massaqoui, a half-black man, who grew up in Nazi Germany. Contrary to what many Americans may think, blacks were not systematically exterminated in Nazi Germany. As non-Aryans, they were not accepted as equals and many were sterilized, but they were not treated in the same way as the Jews. There were so few blacks in Germany that their removal from Germany was also just not a priority. There were perhaps 10-20 thousand blacks, who lived in the Germany during the war. Many were the mixed race offspring of black colonial soldiers that the French used in the occupation of the Rheinland, of which Hitler complained bitterly in “Mein Kampf.”

Black and white racial nationalists in America may not like each other, but they will often work together, when they have common interests. Black nationalists then, as now, agree with white nationalists in some of their separatist racial theories and had a tendency to ally with them in opposition to the existing system in the United States. Though it is certainly counter-intuitive, some white nationalists, such as then in Nazi Germany and still today within America, support black nationalism in the United States as a subversive influence. Barack Obama embraced this subversive, black-nationalist tradition, when he chose Jeremiah Wright, as his spiritual Guru. The Black Liberation doctrine that Wright taught was inspired by black nationalist religious doctrine.