For the last 5-6 years everyone has been trying to label Obama with a defining religion/Ideology. To many, Obama’s belief is a riddle wrapped in a enigma shrouded in a mystery. In truth, Obama’s belief system is accretionary. That is, his belief merges a combination of religious ideas and ideologies as shown in the image below.

Occult religions are roll-your-own religions and typically they combine a lot of different aspects of other religions. The Nazis, for example, combines aspects of Hinduism, Theosophy, Nordic paganism, heretical Christian beliefs, such as that of the Cathars and Meister Eckhart, as well as other occult influences. The Nazis were a satanic/Luciferian movement, much as the Obama movement is.

Though it is useful to call him one thing or another, because it helps people understand who he is, we should not spend too much time and effort trying to label Obama any one thing or arguing among ourselves about it. He is a combination of a lot of different things, Muslim, Black Nazi, New Age, pseudo-Christian, Marxist/Communist. A new name really needs to be invented to accurately describe Obama. Here is it called “Obamanism.” Ultimately, it is about self-worship, which is a basic characteristic of what has historically been described as Luciferianism. He believes he is a higher being with a divine mission to transform the world in his own image.

In front of Muslims he presents as a Muslim; in front of Black Nationalists he sounds like a Black Nationalist; in front of Communists he will be a Communist. You can call it “Obamanism,” an heretical occult fusion of Christianity, Marxism, mystical Islam and other influences. In terms of psychology, a psychopath and pathological liar wants the public to project on him whatever their most profound hopes and desires are. Obama wants to appear to be be all things to all people. For that reason it is difficult to pigeonhole Obama, even though people want to have a nice, clean category that they can fit him into. Obama has many faces. Which face he wears much depends on to whom he is talking.

Black Liberation Theology – is a pseudo-Christian doctrine of Obama’s Trinity United Church of Christ in Chicago, lead by Jeremiah Wright, Jr. It is based on a racial concept, a black identity religion, similar to the white identity religions in concept, such as the (Nazi) Christian Identity religion. As the founder states, Black Liberation Theology was inspired in large part by the belief system of Malcolm X (and Louis Farrakhan), that is the theology of the Nation of Islam, as one can ascertain by comparing the fundamental beliefs of the two doctrines that both equate the white man to the devil or Antichrist and describes the black race as the manifestation of God on earth. Both doctrines teach that white society, America (Its demonic tool of world oppression.) and the Church will be destroyed by a black Messiah or Messiah(s) plural. Jesus is not held to be uniquely god, so multiple “messiahs” can co-exist at the same time. Man exalts himself to messiah status, as Obama has done.

Marxism/Communism – Obama was mentored during his teen-aged years by the nationally known Communist poet and writer, Frank Marshall Davis. The has been well-documented in books such as “The Communist” by Paul Kengor and the Movie, “Dreams from my Real Father” by Joel Gilbert. Communism is often thought of as a kind of an ersatz-religion. Communist leaders like Ho Chi Minh, Mao and Stalin are treated as if they are gods and objects of worship.

Islam – Obama’s claimed father in Kenya was from a Muslim family and his step-father was a practicing Muslim. Obama attended a Madrasah (Islamic School) when he lived in Indonesia. Obama obviously much favors Islamic culture and Islamist causes. He can be said to be an ethnic Muslim. This is someone, who is not actually practicing the religion, but still identifies with it. 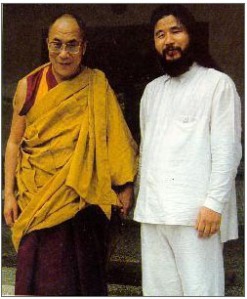 Occult/Luciferianism – Black Liberation Theology is not traditional Christianity, but a heretical occult doctrine. It was inspired by Black Nationalism, especially the theology of the Nation of Islam, which is not orthodox Islam, but also a black cult-like sect. The worship of man is a characteristic of Luciferianism, whether Lucifer as a being is worshiped, or not. Other characteristics are the desire to produce Utopian world transformation and an unified world religion.

Black Liberation Theology teaches that the Black man is the manifestation of God on earth and equates white society to the Antichrist. Destruction of white society will result in world transformation into Utopia, a physical, biblical kingdom on earth. There have been many references to Obama as the “Messiah” and “God.” For these reasons it is believed that Obama has a Luciferian core belief system.

Occult belief can merge with any religion and fuse aspects of several religions. Take, for example, the Japanese cult, Aum Shinrikyo (Supreme Truth), which carried out a Sarin gas attack some years back on the Tokyo subway system, killing 13 people. The syncretic belief system of the cult is a combination of Christianity, Yoga, Buddhism and Hinduism, but the real basic belief is the worship of the cult leader, the God-man, Shoko Asahara. Asahara hoped with the poison gas attack to start an apocalypse and that the subsequent destruction of Japan would lead to transformation of the world into his version of Utopia, resulting in his rule of the world as the prophesied biblical kingdom on earth.

Obama’s religious belief is a fusion of several different beliefs, but the core is really about his own self-exaltation and self-worship and that is a central idea of the occult and Luciferianism.

The gnostic occult is a real, historic belief system that comes in many wrappers. Cults are real and it is an exceptionally bad idea to elect someone to be president of the United States, who professes this kind of belief.

Cult psychology is not limited to small groups. But, as the Nazis showed so well, can also be applied to a national population. Humans have an instinctive need to blindly follow a “great leader,” which goes back to tribal religions. (Tribes often worship their leaders as gods.)

When a megalomanic great leader promises world transformation, it can entrance millions of people, who then forget about the more mundane political issues, like tax rates and unemployment.

What do ordinary political issues matter, when followers believe the “lider maximo” is going to transform the world, as promised? That is, in fact, why Obama’s approval rate in polls is relatively immune to his performance.