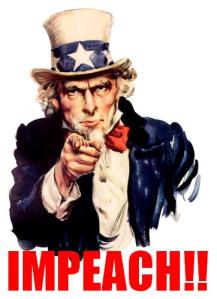 The state-controlled media is completely blacking out the information about an impeachment resolution just introduced in Congress. Contact the congressional leadership and ask them to support the resolution to impeach, if Obama defies the right of Congress to determine when we go to war and brazenly attacks Syria. Most important is Speaker of the House, John Boehner, but the more of the leadership you can contact, the better.

Don’t let the media cover this up! Use the drop-down share menu at the bottom of this page, just under the clip, for easy sharing on FaceBook, Twitter or email.

You can find the contact info, for your own Representative here. If you have time, you may also want to contact the House Judiciary Committee, which deals with impeachment.

When a resolution for impeachment of Bush was introduced by Rep. Dennis Kucinich over the Iraq war, it was reported by CNN the next day. At this time, it has been four days already and none of the media is reporting it.

There are apparently no co-sponsors, so far. Rep. Walter B. Jones, Jr. may well be the last honest man and true American in Congress. Rep. Jones is just drawing a line in the sand, to make Congressmen take a position. Do they still believe in the Constitution as the basic law of the land or not?