In this event a sky-banner reading “IMPEACH OBAMA!” will be towed in the area of the Super Bowl XLVI for three hours. This 46th Super Bowl game will be held at the Lucas Oil Stadium in Indianapolis, Indiana on February 5, 2012. We are raising $2,000 for this event. Any funds left over after the banner is bought will be applied to the next event. Will let contributors know what the actual cost is, when the purchase is made.

WND Article about this Super-Bowl banner

Note: The FAA requires that aircraft stay at an altitude of at least 3,000 ft above such an event. Normal 5-7 foot banners cannot be read at that altitude. So, we will be flying the banner in the area around the stadium, over tailgate parties, downtown Indianapolis and along freeways before the game starts and before the flight restrictions are in place. The roof is retractable and is open, only if the weather is good. The kickoff is near sundown in any case, so there will not be much sunlight after the game starts, if the retractable roof is even open.
.

Expand the clip below to full screen to be able to read the banner more clearly.
. 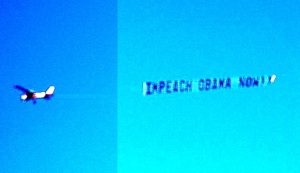 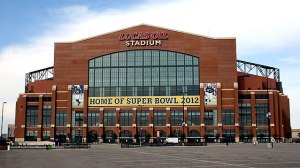 To make a contribution, click on the button below. Suggested contribution is $10-100 dollars. It is certainly okay, of course, if you want to contribute more. Smaller donations are also appreciated and they do add up. Credit Cards are accepted. Any excess funds will be applied to the next event.

It may be a few days, before a mailed contribution is posted.

Your money can be returned via PayPal or mail, if the flight does not happen as planned. In case of a problem such as bad weather, the ad-contract will specify that the flight will be flown at a later date. Will negotiate that with the ad-provider. If you don’t trust the organizer, you can always reverse the charge on your credit card as being fraudulent. So, there is no risk of losing your money, if you pay with a credit card.

This is the list of contributors to date. Ordinary folks from all across the country are funding this event. If you don’t want your full name listed, you can identify yourself by initials or a user nick. Just send a message to “sonsandiego@gmail.com” and let us know.

Whether you believe that impeachment is practical at this time or not, this event is a protest of the media bias surrounding the corrupt Obama regime. We feel that the media has practiced a huge double standard. Criticism of Obama is suppressed by the corporate media as well as generally in society, due to political correctness and even appeasement for fear of social unrest and/or retaliation of some kind. This is a chance to voice our disapproval in a way that is difficult to ignore and there is benefit to that, in itself.

It is said that in times of deception, the truth is subversive. This is very much a time of deception. The truth is that many people think Obama is totally unfit for the presidency and even dangerous, due to his radical, anti-American background. His actions while in office have only confirmed that wide-spread belief in many ways. He should be removed from office as soon as possible. This is a way that we can make our message heard without the censorship of the corporate media.

If you send a contribution via PayPal or send your e-mail address with your contribution by snail mail, you will be added to our e-mail distribution list and receive updates about additional upcoming events. Anything paid in excess of our goal will be carried over to the next event.

This link describes the sky-banner that we did on Veterans Day over Coronado Island.

These groups and organizations publicized the event early-on or helped otherwise promote the event in some way. It helped with fundraising and the corporate-controlled media, of course, would not mention it. The Cost of the banner will be paid entirely by individual contributors, ordinary citizens from the San Diego / SoCal region and from across America.