Obama says “I am God” 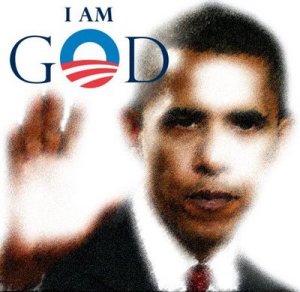 Obama openly hints that he is “God.“

Black nationalists have a long tradition of belief that the black race is God and certain individuals have special roles that are exalted above others in their divinity. Obama caused controversy when he read Psalms 46, which includes the lines “Be still and know that I am God.” and “I will be exalted among the nations.”

This occurred at a memorial for the victims of 9/11 in 2011. Black Liberation Theology, in particular, teaches that the black race is divine. This Psalm appears to have been carefully selected, because it allows him to mouth the words that he is God at this to Americans sacred site. In effect, this can be taken as declaration that Obama is the Mahdi/Messiah at the same time he goes on a campaign of conquest in the Middle East. Obama often treats such public events as an opportunity for the ritualized expression of his Black-Liberation religious beliefs.

It is not uncommon for pathological Narcissists (megalomaniacs) to believe that they are a higher being, prophet or actually God as happens with cult leaders. (See Jim Jones, David Koresh, Charles Manson, Louis Farrakhan and many others.) Some, such as Sam Vaknin, maintain that Obama has Narcissistic Personality Disorder and is an extreme Narcissist, aka megalomaniac. (See the clip of a Vaknin interview at the bottom of this page.)

James H. Cone canonized Black Liberation Theology, which Jeremiah Wright, Jr. has said on national television is the doctrine of Trinity United Church of Christ. Black Liberation Theology as inspired by the black cult doctrine of the Nation of Islam and has the same basic beliefs. The white race is equated to the Antichrist and the black race is called the manifestation of God on earth.

A millennial utopia, the biblical kingdom on earth, is to be created by the destruction of white society. The “kingdom” is envisioned to be a real political and physical ruling government and not just a spiritual event. So, Black Liberation Theology is formulated as a would-be state religion, which is destined to rule over the earth after the final conflict with “white society.”

Because Obama was part of a sect that believed that the black race is God and will produce a black Messiah, it can be assumed that Obama is talking about his own divinity when he reads Psalms 46 at the memorial service in the clip at the beginning. It is a signal to others, who believe as he does and also serves as a provocation to those who may find this type of belief system to be heretical and repugnant.

The attack on the World Trade Center was sacrificial in nature, meant to bring on the Islamic end times scenario and herald the advent of the Mahdi, or Islamic Messiah. At the same site of the attack 10 years later Obama announces that he is God. There have been many allusions by Obama’s followers that he is the Messiah or God, as Obama seems to be hinting with his bizarre reading of this Psalm at the site of the sacrificial murder of 3,000 Americans by Islamic terrorists.

Given Obama’s background self-worshiping religious belief, this seems very significant. Obama made this allusion to his being the “Mahdi” at the same time he goes on a campaign of conquest in the Middle East and is now arming and handing much of the area over to the Muslim Brotherhood, whose professed divine goal is to to re-create a global Muslim caliphate, which will occur when the Mahdi returns.

Obama also said that he has a spark of divinity within near the end of his Nobel Prize speech. See the clip below.

Obama proclaims spark of God inside him in Noble Prize speech

Self-exaltation and self-worship of man and exaltation of man’s works is a central characteristic of the Gnostic occult and what has historically been called Luciferianism/Satanism. If you recall the biblical story, Lucifer wanted to be worshiped the same as God. Gnostic occult means “hidden knowledge” and it is standard practice that occultists hint at their beliefs, but do no speak very openly about their core beliefs, unless it is before a like-minded audience, because many people would strongly reject it and even ridicule it. So, Obama appears to be using this memorial service to flaunt publicly his Black Nationalist/Black Liberation belief system, while maintaining some deniability, in case there is criticism of it.

The basic concepts of the theology of the the Nation of Islam is similar to Black Liberation Theology. In the clip below, Farrakhan, head of the Nation of Islam, declares that he is literally “God.” The Black Nationalist religious movement, including Black Liberation Theology, is a religious movement designed for and started by megalomaniacs that attracts megalomaniacs.

Farrakhan Declares that he is God

It is difficult for a lot of people to imagine that others have such a perverse belief system. Obama provokes like this, partly to see, whether the public will react, or not. If there is no public reaction, it emboldens him to go even further. Many willfully ignore such things.

Finally, this is a clip about extreme Narcissism, in which is it explained that pathological Narcissists often think they are a prophet or even God. You can gain insight into Obama, from a psychological as well as a biblical point of view.

Obama – We Can Create a Kingdom on Earth

35 Responses to Obama says “I am God”

Leave a Reply to Bobby Apple yo Cancel reply