The facts about Obama’s religious background have never been fully reported and are so bizarre that it is difficult for many people to comprehend. This clip is a disturbing outline of the origin and beliefs of Black Liberation Theology, the doctrine of Obama’s so-called “church” in Chicago, Trinity United Church of Christ. This may not be the slickest production that you will ever see, but take 30 minutes to watch and understand it. It’s important! The public very much needs to understand what the belief of Obama’s sect in Chicago really is.

Black Liberation Theology is derived largely from the  racist “Black Theology” of the Black Nationalist movement, which is a cult religious movement that sees the white race as literally “Satan” and the black race as literally “God.” This is an adventist cult movement in the sense that sees Armageddon as a imminent final conflict between the white and black races. After the destruction of the white race, lead by the Black Messiah, a Utopian kingdom on earth is created, which will be a physical, theocratic government. The black messiah is manifested in any man who leads the destruction of the white race and, according to their doctrine, there can be more than one Black Messiah at the same time. 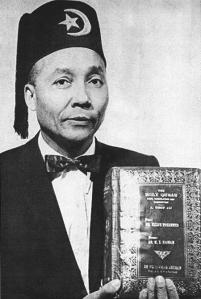 Elijah Muhammad,
in a Shriner fez