Oprah about to receive
The Obama Kiss of Career Death

The greater “Boycott Hollywood” effort is working great! Support for Obama is way, way down this election year. Movie admission ticket sales are in the worst slump in decades (See link below). Hollywood just cannot understand why there is a sales slump.

Partly, it is due to the economic slump and competition from the Internet, but it is also because so many are just fed up with Hollywood. Now that they are vulnerable is the best time. Let us show them that there is a boycott taking place. If you are angry about the election, this is one quick way you can strike back! The number of hits on this page have zoomed since election day.

A “Young Hollywood” fundraiser at the SoHo House in West Hollywood on June 29th was cancelled due to lack of interest. This was supposed to be a critical demonstration of support from young entertainers and it was a total bust! Entertainers see from Oprah’s example that high-profile support for Obama is a real career killer.

Especially, avoid Hollywood during the upcoming holidays. It’s the last chance for them to make up for a very bad year. Please share this link. 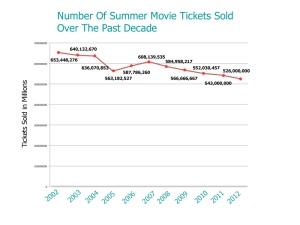 There are so many entertainers supporting Obama that it is easier to boycott the entire industry unless you know the entertainer is not a supporter of Obama. It is an industry largely of traitors. If their sales go down enough, they will be motivated to start getting rid of the traitors, themselves.

This page is dedicated to all of the misguided, wacko entertainers that supported Barack Obama in 2008, will support Obama in 2012 and their cult-like zombie fans that followed them like lemmings in voting for the “Messiah.” They often hold occult religious beliefs (see Madonna, Lady Gaga, etc) that are similar to those of Obama’s beliefs and see the current/traditional American system as being evil, a system that must be overturned, in order to bring on their fantasy of some kind of a utopian, socialist/occult world transformation, promised by their messiah. This is similar to- and compatible with the teachings of Black Liberation Theology, the seditious doctrine of Obama’s radical anti-American, anti-white, anti-Christian religious sect in Chicago, Trinity United Church of Christ.

Oprah Winfrey’s media empire crashed on the shoals of supporting Obama. May the same happen to all of these people. Many millions of American consumers have already sworn to stop buying any Hollywood products forever.

This is a partial list of some of the best known supporters. A full list of supporters would resemble a telephone book. Check back periodically for updates. This list is intended to be those, who are most outspoken and activist in their support of the Messiah. That is, they do more than just passively state their personal preference and make a private contribution, but use their star status as a platform to support Obama. Leave a comment below, if you think someone should be added. A more complete list of formal endorsements for 2012 can be seen here.

Bradley and Colleen Bell, producers of “The Bold and the Beautiful.” – Held Fundraiser in Feb 2012 in Beverly Hills

Jamie Foxx – Hailed Obama as our “Lord and Savior.”

Morgan Freeman – One confused cretin. “Claims to be “God” and that the Tea Party/Opposition to Obama is racist.”

David Geffen – Founder of Geffen Records and Co-Founder of Dreamworks Studios. Gave Obama a boost, when he shifted his support from Hillary. Sold interest in Dreamworks. Probably difficult to boycott.

Jay-Z – Obama’s Running So We All Can Fly.

Ashley Judd – Obama ‘has an incredible devotion to our Constitution

Ashton Kutchner – Produced the “I Pledge (to serve Obama) clip below.

Lady Gaga and her Satanic Message

Spike Lee – Suggested that Obama was pre-orditained(sic) by God.

Eva Longoria – declares Tea Party to be a “dangerous moment.”

Madonna – There’s a Black Muslim in the White House

Chris Matthews – Matthews famous tingle-up-my-leg comment indicates an apparent latent homosexual attraction for Obama. Click link to go to a list of his sponsors, maintained by a Tea Party in Virginia.

Chris Rock – Comedian, who has “issues” with white folks.

Barbara Streisand – Click to read about Streisand’s desperate attempt to save Obama’s campaign.

Will.i.am – Member of Black Eyed Peas. Produces “Yes We Can” and “We are the Ones” videos for Obama. Real name is William Adams, aka Zuper Blahq, Will 1X, Voodoo.

Oprah Winfrey – With Eckhart Tolle taught occult course on Internet to millions. Declared Obama to be “The One”, the black Messiah.

NOTE: Click here to go to the “Boycott Oprah” page, whose members constructed this list of entertainers. We are promoting a boycott of Oprah’s advertisers.

These are a few clips from the past, just to remind you of what the loony Obama-hysteria was like. These people may sometimes have talent, but they are often dangerously deluded and extremely manipulative of their audience.

The songs in some of these clips are filled with New Age / Gnostic religious references and imagery, suggesting that Obama and his followers are divinely inspired, higher beings or actually god-like, with a divine mission to “transform” the US. This is reminiscent of cult-like messianic, ruler-worshiping religious hysterias of the Middle Ages. We sincerely hope that these religious lunatics soon regain their sanity.

We are The Ones by Will.i.am