The Nation of Islam teaches a cult doctrine that there is no spiritual God as a separate being in heaven, but that their Founder and the black race are God. Like the Founder, Fard Muhammad, certain individuals can be exalted to special roles as God. Farrakhan has stated publicly that he is God and that Obama is the Messiah. Therefore threats from “God” can be considered to be threats from Farrakhan on behalf of the black race.

Another copy of the clip was widely seen on YouTube. Farrakhan’s publishing house has filed a copyright claim against this clip with YouTube and for that reason the clip has been disabled on YouTube. The clip has also been uploaded to this blog page for viewing. The YouTube clip is likely re-enabled in 2-3 weeks, that is in July of 2012, if the Nation of Islam does not pursue the copyright claim with a lawsuit. A counterclaim based on “Fair Use” has been filed in response.

Farrakhan’s organization has filed 8-10 copyright claims against the “Stop Obama Now” channel on YouTube and has had the channel deleted twice, before the admin began to file counterclaims based on “Fair Use.” Farrakhan’s representatives apparently hope that YouTube users will be so intimidated just by the threat of a lawsuit that they will allow the clips that the NOI wants to censor to be taken down. This tactic usually works. To enforce a copyright claim they would have to sue the uploader of the clip in district court.

The “Stop Obama Now” channel documents the Nazi-like cult characteristics of Black Nationalism and Obama’s relationship to Black Nationalism. Go to the link below to see some of the other clips that Farrakhan does not want you to see. 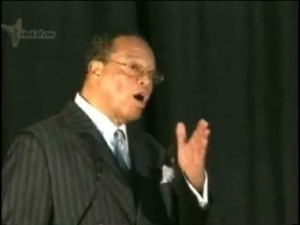