Does Glenn Beck have a Messiah Complex? 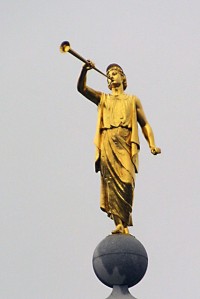 Mormon scripture teaches that God was once an ordinary man and that any ordinary man (temple Mormons in good standing) can become a god. That is, there are many gods and Mormonism is not monotheistic. The Messiah will appear as an ordinary man.

This is similar to Obama’s belief system, as taught by his spiritual mentor, Jeremiah Wright, that the black race is God and any black man can become the Messiah. In the Mormon doctrine, a man becomes a God by celestial marriage and rules as a God over another planet as the God of this planet was once an ordinary man. Mormonism was the first American New-Age interplanetary religion, something like the modern-day UFO cults, Scientology and Realian-ism.

Obama’s occult black nationalist religion actually shares some of the same theological roots with Glenn Beck’s Church of Jesus Christ of Latter-day Saints or “Mormonism” as it is commonly called. Black Liberation Theology is derived in large part from the Nation of Islam, which is not orthodox Islam, but a kind of racist version of the Jehovah’s Witnesses with other Gnostic inputs, such as Freemasonry and Theosophy.

The roots of many of these new adventist American religions can be traced back to radical, revolutionary religious movements, such as the Anabaptists. For this reason, Black Liberation Theology and Mormonism have some similar concepts. Such religions often deal with the foundation in the end times of a real, physical kingdom here on earth, rather than a spiritual kingdom. The Mormons already created a theocracy (Zion) in the 1800’s in Utah, which was ended, when Utah became a state and the US government forced the Mormons to conform to US law. Hundreds of Mormons were imprisoned at that time for polygamy.

Here, a few quotes from the Mormon scripture “Doctrine and Covenants” (written by Joseph Smith) are provided below for reference.

With all of Glenn Beck’s talk, of flocks of geese being signals from God, his being guided by divine providence and the dawn of a new age or a “Great Awakening,” presumably as a quasi-religious movement led by him, Beck appears to be playing the role of the Mormon “Savior.”

1 When the Savior shall appear we shall see him as he is. We shall see that he is a man like ourselves.

2 And that same sociality which exists among us here will exist among us there, only it will be coupled with eternal glory, which glory we do not now enjoy.

4 In answer to the question— ls not the reckoning of God’s time, angel’s time, prophet’s time, and man’s time, according to the planet on which they reside?

23 A man may receive the Holy Ghost, and it may descend upon him and not tarry with him.

19 And again, verily I say unto you, if a man marry a wife by my word, which is my law, and by the new and everlasting covenant, and it is sealed unto them by the Holy Spirit of promise, by him who is anointed, unto whom I have appointed this power and the keys of this priesthood; and it shall be said unto them—Ye shall come forth in the first resurrection; and if it be after the first resurrection. in the next resurrection; and shall inherit thrones, kingdoms, principalities, and powers, dominions, all heights and depths—then shall it be written in the Lamb’s Book of Life, that he shall commit no murder whereby to shed innocent blood, and lf ye abide in my covenant, and commit no murder whereby to shed innocent blood, it shall be done unto them in all things whatsoever my servant hath put upon them, in time, and through all eternity; and shall be of full force when they are out of the world; and they shall pass by the angels, and the gods, which are set there, to their exaltation and glory in all things, as hath been sealed upon their heads, which glory shall be a fullness and a continuation of the seeds forever and ever.

21 Verily, verily, I say unto you, except ye abide my law ye cannot attain to this glory.

22 For strait is the gate, and narrow the way that leadeth unto the exaltation and continuation of the
lives, and few there be that find it, because ye receive me not in the world neither do ye know me.

23 But if ye receive me in the world, then shall ye know me, and shall receive your exaltation; that where l am ye shall be also.

24 This is eternal lives—to know the only wise and true God, and Jesus Christ, whom he hath sent. I am he. Receive ye, therefore, my law. (Note: Is Joseph Smith saying that he is Jesus?)
25 Broad is the gate, and wide the way that leadeth to the deaths; and many there are that go in threat, because they receive me not, neither do they abide in my law.

Glenn Beck tries to Prove Book of Mormon on Air

FROM THE BOOK OF ABRAHAM – MORMON CREATION STORY BY GODS (Plural)

The Mormon creation story is that the earth was created by a committee of God-Men from the planet of Kolub, who were once ordinary men, like Glenn Beck and Mitt Romney.

The Gods plan the creation of the earth and all life thereon—Their plans for the six days of creation are set forth.

1 And then the Lord said: Let us go down. And they went down at the beginning, and they, that is the Gods, organized and formed the heavens and the earth.

3 And they (the Gods) said: Let there be light; and there was light.

4 And they (the Gods) comprehended the light, for it was abright; and they divided the light, or caused it to be divided, from the darkness.

6 And the Gods also said: Let there be an expanse in the midst of the waters, and it shall divide the waters from the waters.

9 And the Gods ordered, saying: Let the waters under the heaven be gathered together unto bone place, and let the earth come up dry; and it was so as they ordered;

11 And the Gods said: Let us prepare the earth to bring forth grass; the herb yielding seed; the fruit tree yielding fruit, after his kind, whose seed in itself yieldeth its own likeness upon the earth; and it was so, even as they ordered.

14 And the Gods organized the alights in the expanse of the heaven, and caused them to divide the day from the night; and organized them to be for signs and for seasons, and for days and for years;

15 And organized them to be for lights in the expanse of the heaven to give light upon the earth; and it was so.

17 And the Gods set them in the expanse of the heavens, to give light upon the earth, and to rule over the day and over the night, and to cause to divide the light from the darkness.

18 And the Gods watched those things which they had ordered until they obeyed.

20 And the Gods said: Let us prepare the waters to bring forth abundantly the moving creatures that have life; and the fowl, that they may fly above the earth in the open expanse of heaven.

22 And the Gods said: We will bless them, and cause them to be fruitful and multiply, and fill the waters in the seas or agreat waters; and cause the fowl to multiply in the earth.

24 And the Gods prepared the earth to bring forth the living creature after his kind, cattle and creeping things, and beasts of the earth after their kind; and it was so, as they had said.

26 And the Gods took counsel among themselves and said: Let us go down and form man in our cimage, after our likeness; and we will give them dominion over the fish of the sea, and over the fowl of the air, and over the cattle, and over all the earth, and over every creeping thing that creepeth upon the earth.

27 So the Gods went down to organize man in their own image, in the image of the Gods to form they him, male and female to form they them.

29 And the Gods said: Behold, we will give them every herb bearing seed that shall come upon the face of all the earth, and every tree which shall have fruit upon it; yea, the fruit of the tree yielding seed to them we will give it; it shall be for their meat.

The Gods finish their planning of the creation of all things—They bring to pass the Creation according to their plans—Adam names every living creature.

1 And thus we will finish the heavens and the earth, and all the hosts of them.

4 And the Gods came down and formed these the generations of the heavens and of the earth, when they were formed in the day that the Gods formed the earth and the heavens,

6 But there went up a mist from the earth, and watered the whole face of the ground.

7 And the Gods formed man from the dust of the ground, and took his spirit (that is, the man’s spirit), and put it into him; and breathed into his nostrils the breath of life, and man became a living soul.

8 And the Gods planted a garden, eastward in Eden, and there they put the man, whose spirit they had put into the body which they had formed.

9 And out of the ground made the Gods to grow every tree that is pleasant to the sight and good for food; the tree of life, also, in the midst of the garden, and the tree of knowledge of good and evil.

10 There was a river running out of Eden, to water the garden, and from thence it was parted and became into four heads.

11 And the Gods took the man and put him in the Garden of Eden, to dress it and to keep it.

12 And the Gods commanded the man, saying: Of every tree of the garden thou mayest freely eat,

13 But of the tree of knowledge of good and evil, thou shalt not eat of it; for in the time that thou eatest thereof, thou shalt surely die. Now I, Abraham, saw that it was after the Lord’s time, which was after the time of Kolob; for as yet the Gods had not appointed unto Adam his reckoning.

15 And the Gods caused a deep sleep to fall upon Adam; and he slept, and they took one of his ribs, and closed up the flesh in the stead thereof;

16 And of the rib which the Gods had taken from man, formed they a woman, and brought her unto the man.

17 And Adam said: This was bone of my bones, and flesh of my flesh; now she shall be called Woman, because she was taken out of man;

18 Therefore shall a man leave his father and his mother, and shall cleave unto his wife, and they shall be bone flesh.

19 And they were both naked, the man and his wife, and were not ashamed.

20 And out of the ground the Gods formed every beast of the field, and every fowl of the air, and brought them unto Adam to see what he would call them; and whatsoever Adam called every living creature, that should be the name thereof.

21 And Adam gave names to all cattle, to the fowl of the air, to every beast of the field; and for Adam, there was found an help meet for him.

This is a neutral documentary on Mormonism:

FRONTLINE The Mormons Part One

These are anti-Mormon films:

Does Glenn Beck have a Messiah Complex?

Obama, Romney and Freedom of Religion

5 Responses to Does Glenn Beck have a Messiah Complex?