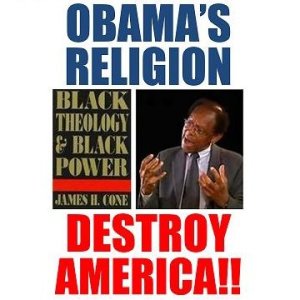 This blogger was one of the first to write that Obama’s agenda is to destroy America. These days it seems like almost everyone is saying it. That just shows how far we have come.

This is the divine goal of Black Liberation Theology, a hateful and perverse pseudo-Christian cult religious doctrine, and it is also the goal of other influences in this life, such as the communism of Frank Marshall Davis. However, because he has a perverse agenda to do it, does not mean he will actually be able to do it.

Come on, folks. America has withstood worse times than this (see the Civil War) and its destruction is a lot easier said than done. Obama and his minions are hardly Supermen, even if they believe it in their own fantasies. Have a little confidence. At the rate Obama is descending, it will not be America, which is destroyed, but Obama in his second term, if he should be re-elected.

The Democrats should be fighting the hardest to put this megalomanic loon out of office, because the collapse of his support in a second term will also expose the deceit and frauds of the leadership of the Democratic Party.

The Republican leadership has also not responded as they should have to Obama’s criminality and malfeasance in office and they will also have their pants pulled down to their ankles in full public view in Obama’s second term.

There is no need to go into the enormous lies and deception of the corporate media that will come to public light.

Fear is used to keep the opposition under control. We need less fear and more confidence that the Obama/Black Messiah lunacy is well on its way to utter collapse. We need people to act on their new-found confidence to help pull down this crumbling monument to stupidity and corruption. Let us do it together to re-affirm the past one more time. Chances like this do not come often. We are honored to have the opportunity to do the right thing and almost certainly without the much more severe sacrifices that those in the past have had to make.

Every cloud has a silver lining and there would actually be benefits to an Obama second term. This is not something so much to be feared, though it will be a hardship for a great many people, but it should also be accepted for the change that it would produce. The current political correctness should be an early casualty.

Of course, he can also be voted out and disgraced, but just saying that a second term is not going to destroy America and it will be more like water torture of the political and media elites that have propped up the Obama regime.

One thought on “Who will survive Obama’s Second Term?”