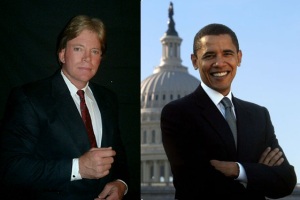 Rush compared Obama to Adolf Hitler in the way he makes propaganda. Hitler is a useful icon. When you invoke Hitler in a comparison everyone knows what you mean, but a more accurate comparison would be to David Duke the debonair, American neo-Nazi and Grand Wizard of the KKK, who put a friendly face on racial extremism.

The black liberation doctrine of Obama’s church in Chicago is based on black racial identity and is similar to a black version of Nazism in its fundamental racial concept. It is little understood history, but black emulation of white supremacy goes back nearly a century, when Marcus Garvey recommended that black groups model themselves after white supremacist groups. Garvey was the prophet of black nationalism and once predicted that one day the black race would produce their own “black Hitler.” See the link below for more information.

This entry was posted in Black Cults, Election 2012, Farrakhan, Obama. Bookmark the permalink.